The founder of the castle Nový Berštejn, Adam Berka of Dubá, came from the southern branch of the dynasty Ronovci. Originally, he inherited the old, already dilapidated family seat, the Castle Berkenštejn (Starý Berštejn today) plundered by the Hussite, which is still located north of the city Dubá above th village Vrchovany. Prior to a restoration of the Gothic castle he gave primacy to the building of a new seat of the dynasty, the castle Nový Berštejn (sometime between the years 1558 and 1567) on the site of a fortress from the time of the Holy Roman Empire. This castle was also called Nový Berštejn, Perstein, Neuperstein, Perstyn. The Renaissancebuilding had two floors (today’s Central Wing), the upper floor was made of wood.

After 1618 the castle belonged to Adams’s son Václav Berka, the chief judge in the country under the government of Fridrich Falcký and one of the most important personalities of the resistance against the Habsburg dynasty. After the defeat of the Bohemian Estates (1620) he fled from the country, and his confiscated property was turned over into the possession of Wallenstein.

Albrecht Wenzel von Wallenstein was one of the great generals of the Holy Roman Empire. Strangely enough he was born into a Protestant family, connected to the Czech aristocracy. Wallenstein was murdered as he tried to escape from the arresting officers. 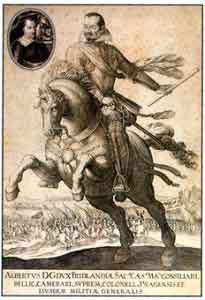 Imperior Ferdinand II gave the whole acreage around Doksy in 1634 to the colonel Earl Richard Walter Butler, one of the murderers of Albrecht von Wallenstein. Earl descended from an old Irish dynasty. His heirs had their domicile at the castle Nový Berštejn until the year 1723.

The new owner, earl Karel Frantisek Rudolf Sweets-Sporck, developed extensive construction activities on the estate, and also built amongst others the baroque Church “Discovery of the Holy Cross” in Dubá. The castle Nový Berštejn, as well, was rebuilt in Baroque style and expanded with sidewings.

From 1810 on the castle belonged again to the dynasty of Wallenstein, which rebuilt it and gave it its present appearance. The land reform in the First Republic brought the end of the Wallenstein reign.

Since the year 1920, Tomáš Maglic, Director General of the Skoda Works in Pilsen, was the new owner of the castle after agrarian land reforms. A tennis court was established in the castle park too.

In the period before the Second World War, the castle Nový Berštejn belonged to the Kabát family, that not only promoted the castle, but also the manor house and the brewery. The completion of the property-renovations was mentioned as good news in the newspaper then.

During the Second World War the castle was administered by the German Baron Ludolf von Wedel-Parlow. He did not only take care of the prosperity, but gave the castle an additional new significance. The castle also served as a meeting place for the art scene, a feature film was shot here, and later it served as an archive for french books stolen by the Nazis. With the help of local children, the most valuable items were taken to a safe location during the Russian bombardment. The bombing of the village also destroyed the Dubá Castle Brewery, which processed the local famous hop-variety “Daubauer Grünhopfen”, completely.

In 1945, the castle was, as German property, confiscated by state and initially used as a policlinic, later as a boarding school. The entire property came down more and more, so that in 1983 it should be even taken down.

The decline of the castle Berštejn was ended in 1991 with the commitment of Miroslava Karel Slezak and his friends Alexander Perner (architect) and Otakar Vondráček. They renovated the castle completely in the years 1992 – 1996, with a lot of sensitivity and expertise. Since 1997, the chateau owner also lives with the family here and from April to October with his wife Marketa Slezak personally cares for the castle guests. In 2012 Miroslav Karel Slezak prize receives for the reconstruction of the castle without European and national subsidies and maintenance of the monument in “My Country, in the heart of Europe.” Chateau Berštejn Hotel & Golf Resort has been more times nominated for election Czech Hotel Awards. In 2016 and in 2017, this award finally won, became “The Hotel of the Year 2016” and “The Hotel of the Year 2017”, category Congress.